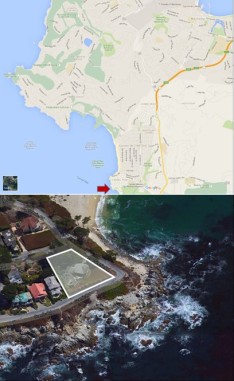 Location of “The Wave”

Deep in the Carmel Point neighborhood, where Scenic Drive bends at a right angle around the rocky shore, a home sits on legendary plot of land.  Stuart Haldorn and his wife Enid had grand plans for this parcel. In 1945, after selling their ocean front mansion on Cannery Row, the couple retained Frank Lloyd Wright to design their next home in Carmel, California. The couple was flush with cash, receiving a huge bequest when Stuart’s mother, Mary Murray, passed away in 1940. This windfall was on top of the millions they received when Mary’s wealthy husband, James A. Murray died in 1921.

Wright, who steadfastly refused to pick his favorite project, admitted that the Haldorn’s prospective home “was one of the best houses I ever designed.” Unfortunately, the home was never built, probably due to the unique and costly design. Wright commented that “the public road along the sea was a drawback hard to overcome.” His design reached under Scenic Road with a tunnel to connect the rocky shoreline with subterranean elements of the house. Windows in the home were designed to keep out the ocean spray, and the concrete roof was designed to accommodate landscape plantings. Wright didn’t let his work go to waste however, using some of the Haldorn design elements in future works – notably the window design for the Mrs. Clinton Walker House in Carmel.

Haldorn’s home design was called “The Wave,” and it is featured prominently in the preeminent compendium of Wright’s work, Frank Lloyd Wright Designs, The Sketches, Plans and Drawings by Bruce Brooks Pfeiffer, and published by the Frank Lloyd Wright Foundation.  A sketch of the home (above) is the cover image for the book’s Introduction and four pages provide narrative on the project and various site plans.