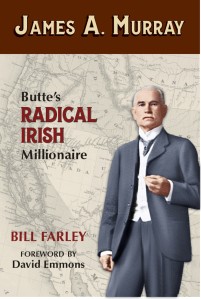 I discovered Jim Murray sorting through thousands of pages of family records left behind when my father passed away in 2012. Murray was my great great granduncle.

Amongst all of the papers, one newspaper article caught my eye. Published shortly after Murray’s death in 1921, it was an obituary titled “Prominent in development of the entire West” detailed the breadth of his holdings. His Business Empire included gold, silver and copper mines, theaters, banks, resorts, and waterworks from British Columbia to Mexico. The article ended with a note that he loved practical jokes. He sounded like someone I wanted to get to know. First, because my career centered on real estate and infrastructure development in the West, and second because I also enjoy a good practical joke.

What I discovered was a unique individual who started his climb to riches on the lowest rung of society’s ladder – an Irish Catholic Immigrant that fled during the Great Famine as a child with parents, and with no education or money as an adult, built a fortune alone and unaided.

He left his parents in Canada when he was just 18 and worked his way to the West and the Montana wilderness. It is there, working at the base of the Rocky Mountains, that he made his first million – prospecting for gold, and then loaning his money to others. In 1900, The St. Paul Globe summed up Murray’s early days this way, “He carried his weapons in sight and whenever anyone questioned his right he would simply say, “What’s mine is mine, and I’ll have it if I have to go to hell for it.” When the railroads reached Montana, Murray started riding the rails to all corners of the West to build his empire.

At the time he passed away in his seaside mansion in California, his holdings were valued at $15.0 million– an impressive sum in 1921. The equivalent wealth in today’s economy is close to $3.0 billion. That would put him in a class with Ted Turner, T. Boone Pickens, Bruce Nordstrom, founder of the up-scale department store chain, and NFL owner Alex Spanos.  Images from his life can be found on my Pinterest Page

Murray’s story was hidden from history by his own doing. He operated in secrecy for much of his life. He was superstitious about having his name on any building, he hid many properties under the names of others, even dead family members, and when he donated to charity, he swore the beneficiary to keep his gift anonymous.

His radical legacy, unique to Bonanza Kings and capitalists of his era, includes: