Local governments are a focus of economic planning ­– with varying degrees of state oversight. These entities, cities, counties, and unincorporated communities, are a logical focal point in part because they produce the most read and debated documents in government (annual operating budgets, long-term capital expenditure plans, financial statements, and general plans). These documents guide local officials, individuals, and community organizations on policies, programs and land-use decisions that shape the character of cities and counties. Interspersed in these documents are microeconomic policies that can play a significant role in defining the economic vitality of these communities.

To assess the current state of microeconomic policy-making and planning at the local level, I compared policy documents of the five largest cities in Virginia; Virginia Beach, Norfolk, Chesapeake, Richmond, and Newport News, along with the policy documents of a regional planning entity, the Hampton Roads Planning District Commission.

The documents reviewed for this analysis were the:

Forty-one (41) economic measures (e.g., indicators, statistics, goals) from these six entities are entered in individual rows on the left-hand column of the table below (Table 1). Each entity is represented by an individual column to the right of these entries. If the entity uses the measure in the corresponding row, a symbol is provided to indicate if they have time series data (TS), static, or just one year of data (S), and whether or not they compare the data set with other jurisdiction (C).  It is worth noting, that not a single measure is used universally across all jurisdictions. The following measures are the most popular: 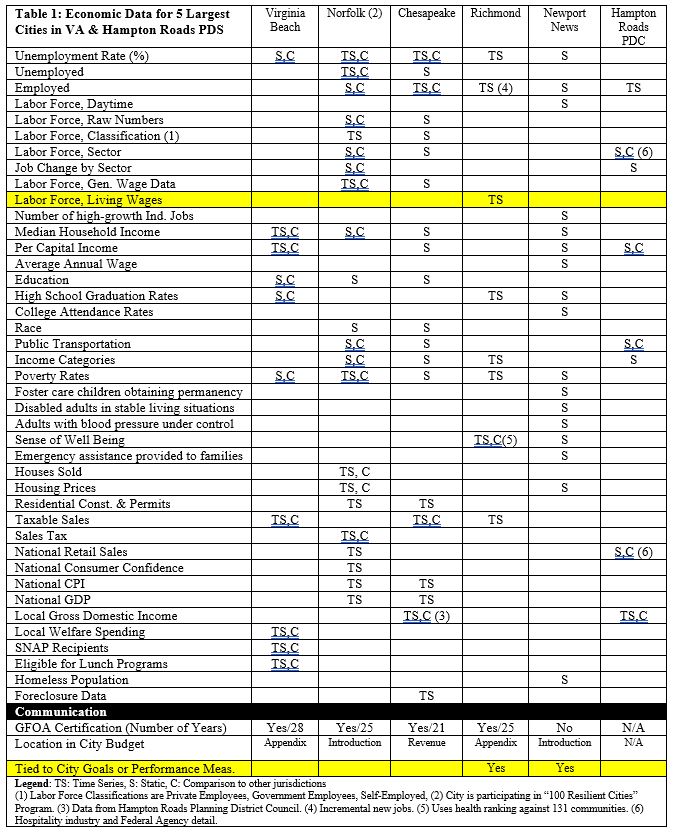 In addition to the disparity of economic data used by these jurisdictions, only two, Richmond and Newport News imply that the stated measures were part of their goals. For the rest of the organizations, the information appears to be merely descriptive, and does not tie to any local policies. In fairness to the communities without economic goals, Richmond and Newport News did not provide any evidence that the goals were supported by unique programmed activities, beyond the classic business retention and recruitment efforts. It is worth noting that four of the five communities only use federal poverty level measures to measure lower incomes in their community. Richmond stood alone as the only community to provide a more realistic view of this segment. Richmond consolidated income data to identify the portion of their population earning less than a living wage, a much more accurate picture of the number of people in a community under economic stress, and a critical piece of information for shaping microeconomic policies and income support programs.

Research and coordination of local economic development programs is hampered by this disparate approach to economic metrics. The professional association most likely to establish a common framework for the collection and analysis of microeconomic data is the Government Finance Officers Association (GFOA). This national organization establishes standards for information within an operating budget, and confers a distinguished budgeting award to those jurisdictions that comply with their standards.  Four of the five cities in my sample set have qualified for the GFOA distinguished budgeting award for over 21 years.

The current GFOA standard for economic data reveals why there is so much disparity in the data used by municipalities in this sample. The GFOA standard for community data, which is not mandatory for their award program, and the associated evaluation measures are as follows:

Standard: #C3: The document should include statistical and supplemental data that describe the organization, its community, and population.

Is statistical information that defines the community included in the document (e.g., population, composition of population, land area, and average household income)?

Is supplemental information on the local economy included in the document (e.g., major industries, top taxpayers, employment levels, and comparisons to other local communities)?

Unfortunately, the above standard and evaluation criteria do not provide sufficient detail to create a common framework for microeconomic data. Public finance officials should work with their local economic development colleagues to pursue a framework that GFOA could memorialize in their awards programs. This would improve the utility of economic metrics for regional governments, residents and researchers.

About the author: Bill Farley has 30 years of experience in local economic and community development as a public official, entrepreneur and corporate executive. He is a former instructor of public policy and public finance at the University of Southern California Price School of Public Policy. He is currently advising organizations on local economic policy while completing a PhD in Public Policy and Administration at Virginia Commonwealth University.